Get Lucky launch as featured in the February issue of Pinoy Star. Get your copy of Pinoy Star now! Thanks Pinoy Star team for your wonderful support:)

From left: Host Pamela Wildheart interviews Get Lucky editors Migs Bravo-Dutt and Manuelita Contreras-Cabrera about the inspiration for the book.

Posted by Get Lucky Anthology at 06:52 No comments:

Where Can I Find Get Lucky?

To our friends overseas, you can order Get Lucky online through our publisher's link below:

In Singapore, Get Lucky is available at major bookstores including Kinokuniya, Books Actually, Booktique, MPH. Please check the local literature shelf or ask the shop assistant. 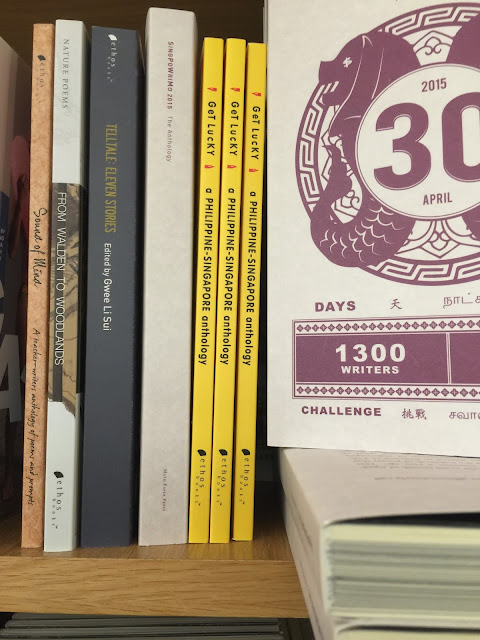 Posted by Get Lucky Anthology at 17:34 No comments:

Get Lucky on Philippine Star

Thanks to Alfred A. Yuson for sharing this earlier:

Get Lucky Launched to a Full House

Thanks to everyone who came and supported the successful launch of Get Lucky during the Singapore Writers Festival. We could not have done it without friends and family who joined us last November 7 at the Arts House.


And here's more about Get Lucky:
The anthology brings together writings in three genres by 30 contributors. It features twenty-two poems, nine personal essays, and four short stories of Filipinos’ shared and individual experiences of living, or having lived, in Singapore. “We Filipinos have a wealth of stories to tell, and as our community in Singapore has grown bigger, there has been a larger, deeper pool of experiences to tap and share through prose and poetry,” says Migs Bravo-Dutt, an editor of the book.
Several established Singaporean writers, including Singapore literary pioneers Edwin Thumboo and Anne Lee Tzu Pheng, contributed to the book in response to their fellowship with Filipinos. “We hope that through such a response, we can strengthen our camaraderie with our Singaporean counterparts as we seek to foster a fellowship in mutual trust with them through this collection,” says Manuelita Contreras, another editor of the book.
The book has received a warm welcome from both the Filipino and Singapore communities. “The fact that Get Lucky is supported by the National Arts Council of Singapore is testament to the importance of this book, which in the words of Singaporean poet and critic Gwee Li Sui, is a long overdue collection,” says Eric Tinsay Valles, one of the editors.
Ethos Books publisher Fong Hoe Fang says he was thrilled to publish Get Lucky because Ethos Books has always supported the establishment of platforms for voices that reflect the ethos of our times. A previous Ethos-published anthology, Love Gathers All, assembled poems by Filipinos and Singaporeans.
“And the writers in Get Lucky are obviously amongst the most articulate of their generation in a country far from their home of origin,” he says. “Their concerns and reflections in a country they chose to work and live in are as important as the voices of native Singaporeans, especially when deep analysis almost always shows a shared humanity that serves to unite rather than divide.”
Get Lucky is the #3 bestselling book at the 2015 Singapore Writers Festival. It was launched to a full house at The Arts House at the Old Parliament on November 7, 2015 in a convivial gathering of Filipinos and Singaporeans alike.
The book is now available at major bookstores in Singapore and on http://tinyurl.com/oalxuh3.
About Get Lucky
Get Lucky is an anthology of everything Filipino in Singapore, exploring and celebrating the themes of family, faith, friendship, love, and of course, the place that cuts across the lives of Filipinos in Singapore: Lucky Plaza.
Editors:
▪   Manuelita Contreras-Cabrera
▪   Migs Bravo-Dutt
▪   Eric Tinsay Valles
Contributors:
http://www.panitikan.com.ph/content/groundbreaking-anthology-filipinos-singapore-launched-full-house
Posted by Get Lucky Anthology at 22:09 No comments:

“In this remarkable anthology, the real -- the Filipino soul in diaspora, the community of people in understanding and friendship -- is as the words of the poetry, fiction, and personal narrative have it. And thus, in Singapore’s Lucky Plaza, the hum and drum, the rout and routine of day-to-day living, all bespeak a stirring image of humanity’s fellowship in mutual trust and love.”

“Get Lucky is least about luck. It is about personal destinies and discoveries, adventures whose heroes become part of the story of another place. This long overdue collection features earnest and emergent questing voices from the Filipino diaspora in Singapore alongside a few much-admired Singaporean writers. Take a sharp turn out of the Singapore Story and find yourself instantly between spaces, at an edge that lies within, before a cultural presence that shall be heard.”

Gwee Li Sui
Dr. Gwee Li Sui is a literary critic, a poet, and a graphic artist from Singapore

“This commendable anthology of thematic poetry, short fiction, personal essays and visual art does indeed manifest a fusion of two cultures: Singaporean and Filipino, the latter as it is continually imbedded in a host city-state that welcomes its contributions.

Transporting this culture of appreciation to “an environment that brings the best out of the Filipino” equates to good fortune. The luck here is not instant but hard-won, extending beyond the plazas of commerce and opportunity.
It includes “the response of Singaporean writers to their fellowship with Filipinos” — surely equally as warm, as evidenced by their own contributions to this book.

The camaraderie has engendered fine literature, as a testament to the shared fortune of creativity. As brothers and sisters, we all make our own luck, together. Ultimately it is a loving one that shares the good joss and the good word.”

“Familiar and at times poignant, these stories of longing and survival are inspiring to read. Annabelle Fabia-de Arroz's 'Inexplicable' shows the amazing grace of a woman in accepting that a child who dwells in the shelter of the Lord will forever rest in his shadow. A beautiful story that all mothers should read.”

Adeline Foo, Writer and a Mother of Three

Posted by Get Lucky Anthology at 02:15 No comments:

Get Lucky Will Be Launched During the Singapore Writers Festival

Happy to share that Get Lucky will be launched during the upcoming Singapore Writers Festival - details of launch below. Friends of Get Lucky, hope to see you there!

For those who would like to pre-order the book, you can get your copy from
http://tinyurl.com/oalxuh3 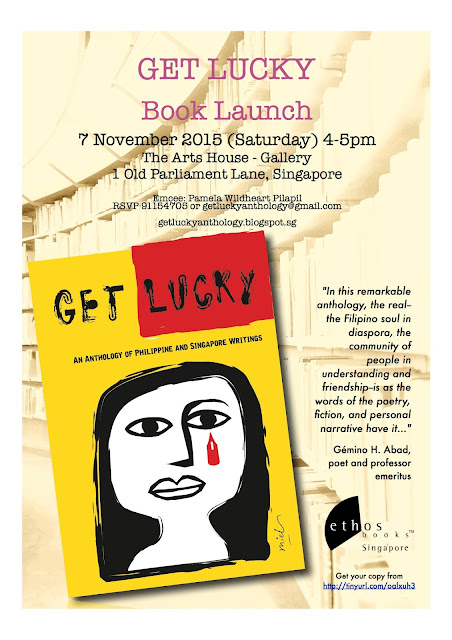 Get your copy from
http://tinyurl.com/oalxuh3

Email ThisBlogThis!Share to TwitterShare to FacebookShare to Pinterest
Labels: Get Lucky An Anthology Of Philippine And Singapore Writings, Singapore Writers Festival

It's Official: Ethos Books is Publishing Get Lucky

We could not be any happier to have Ethos---a press dedicated to publishing diverse and high quality literary works in Singapore---as our publisher. We are elated to have Get Lucky become part of its growing list of literary titles.

Watch this space for more details of the launch.

Again, many thanks to all our writers and artists for their wonderful contributions!!!

For more details about Ethos Books, please visit their website:

http://www.ethosbooks.com.sg
Posted by Get Lucky Anthology at 01:32 No comments: